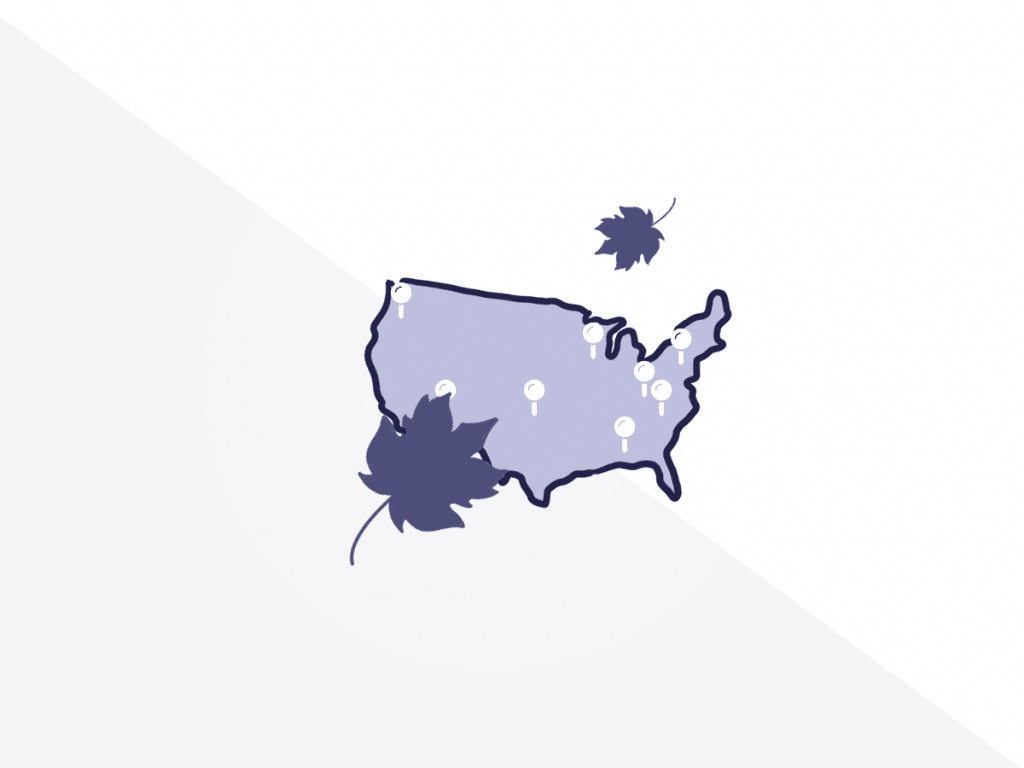 Looking for leaf peeping? Here are some of the best places to go.

Fall is in the air. Up north, the leaves are already changing color, transforming the green landscapes of summer into beautiful orange, yellow, and red. This phase of the season only lasts a short time, so it’s great to get out there and see as much of it as possible while you can. No matter where you are in the country, there are some great places to take a fall road trip and see the sights this time of year.

You really can’t go wrong with any fall foliage road trip in New England. The widespread forests, rolling hills, and occasional mountains mean that wherever you go, you’re bound to see some beautiful scenery.

One of my favorites, though, is Vermont Route 100. This is a north-south road that is basically the spine of Vermont, stretching all the way from the Canadian border near Lake Champlain to the Massachusetts line at its southern end. No matter where you enter or exit Route 100, you’re in for a treat.

For a bonus round, take a detour west on Route 9 toward Bennington and admire the view from Hogback Mountain. You can also head south into Massachusetts and enjoy the Berkshire Mountains, a continuation of the same range Route 100 passes through in Vermont.

Skyline Drive is the only public road through Shenandoah National Park. It begins at the north end of the Blue Ridge Parkway (one of our favorite drives in general), and continues along the Blue Ridge Mountains through the park.

There is a fee to drive it, which goes toward park projects and maintaining the road for all to enjoy. These include nearly 70 overlooks that provide scenic views across the park. The drive itself takes about three hours, but plan on spending a full day to stop frequently at the overlooks and take in the views.

Moving further south, the Cherohala Skyway is a fun 43-mile drive through the Cherokee (on the Tennessee side) and Nantahala (in North Carolina) National Forests. The name “Cherohala” is a mashup of the National Forest names that it goes through.

I had the pleasure of enjoying the Cherohala Skyway myself this past spring, both on my motorcycle and in my camper van. Even outside of foliage season, it’s an enjoyable trip, with numerous scenic views across the Smoky Mountains.

Driving enthusiasts, take note: the Cherohala Skyway is quite close to the famous Tail of the Dragon, which has 318 curves in just 13 miles. You won’t have time to admire the scenery as you follow the road, but the Dragon and Cherohala Skyway make a great loop together. That’s how I did it.

Usually it’s only northern regions that people think of when it comes to a fall road trip, but don’t write off the south. The Russell Brasstown Scenic Byway winds through the southern Appalachian Mountains, and the Chattahoochee National Forest. As you go up in altitude, the temperature decreases, resulting in a cooler climate that encourages the leaves to change color like they do up north.

Be sure to check out Brasstown Bald, the tallest mountain in Georgia, which is along this route. A short detour off the route is Helen, a town that looks straight out of Bavaria, Germany, rather than Georgia. Home to just 430 people, it’s the state’s third most visited place. It’s worth the side trip!

This drive gives you not only a great look at fall colors but also Lake Superior. True to its name, the North Shore Scenic Drive follows the north shore of Lake Superior, from Duluth to Two Harbors at the Canadian border.

Along the way, there are beaches of different colors, such as pink and black, as well as ancient lava. Palisade Head is a lakeside cliff that’s 320 feet above lake level, giving you an excellent view of Lake Superior. There are several state parks along the way as well, providing great opportunities for hiking. Be sure to check out this mile-by-mile list of sites to see along this drive.

Not every fall road trip has to include leaf peeping. For more of a man-made adventure, the old U.S. Route 66 stretching from Illinois to California is the quintessential American road trip. You won’t see much foliage in the southwest deserts, but heading back east there will be some. The real attraction, though, is all of the throwbacks to the heyday of the Mother Road. No matter what state you’re in, there are plenty of diners, statues, and beautifully painted murals, all throwbacks to the 1950s when this was the way to get from coast to coast, back before the Interstates. There are also museums and visitor centers all along the way, all of which are happy to tell you all about the history of the place.

While U.S. Route 66 was officially discontinued in 1985, the states it passed through have put great effort into maintaining its history. Oklahoma, for example, turned US 66 into Oklahoma 66, making it easy to follow. You certainly don’t have to follow its entire 2,448-mile length from Chicago, Illinois, to Santa Monica, California, to enjoy it. I, however, am currently in the middle of a massive Route 66 road trip, following it all the way from Illinois to the west coast. Stay tuned for more about this epic journey!

Washington state’s Olympic Peninsula is that part of the state that juts out into the Pacific Ocean west of Seattle and Tacoma. The loop is basically a route around the perimeter of Olympic National Park. You may not see a lot of foliage here, since this area is actually a rainforest, despite its northern latitude. Besides the ocean (and there are plenty of beaches to visit), there are also lakes, waterfalls, and even hot springs along this route.

As for local culture, obviously Seattle has a great deal of it. Besides that, Aberdeen is where Kurt Cobain grew up. The town has many exhibits in his honor that tell you about his life, and even take you to his childhood home. Elsewhere, Neah Bay was, and still is, home to the Makah tribe. The Makah Cultural and Research Center has exhibits about their culture, as well as artifacts dating back hundreds of years.

I’ve never been to the Pacific Northwest, but when I go, the Olympic Peninsula Loop is going to be a must-see for me.

New Mexico is scenic in its own way, and the Enchanted Circle Scenic Byway is one of the best ways to see it. This loop circumnavigates Wheeler Peak, the highest in New Mexico at 13,161 feet. It starts and ends in Taos, not far from Taos Pueblo, where people have lived in adobe buildings continuously for more than 1,000 years. (Taos Pueblo is currently closed to visitors due to the pandemic.)

If you’re into literature, check out the D. H. Lawrence Ranch near San Cristobal, where the author did a great deal of writing between 1922 and 1925. His ashes are here as well. Local artists show off their work at Artesanos de Questa. Red River looks straight out of the old west, while Elizabethtown is an old mining town. After paying respects at the Vietnam Veterans Memorial, Taos Canyon makes for a fun drive to complete the loop.