Vehicle Body Inspection: What You Need To Know 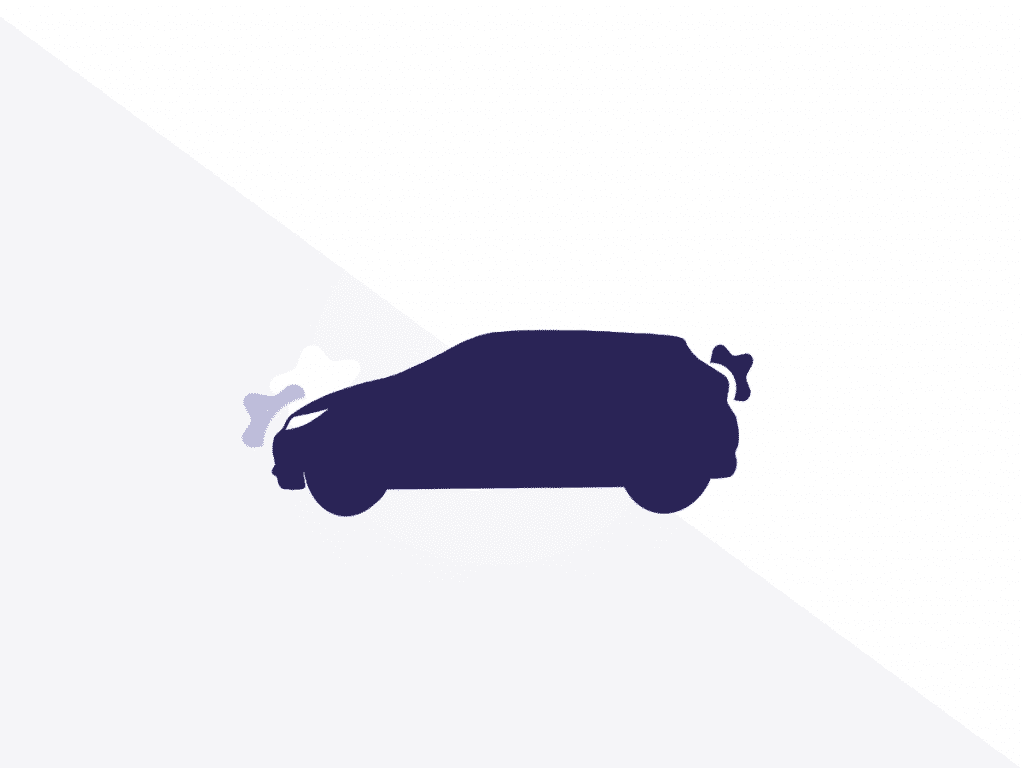 Here’s Everything You Need to Know About Inspecting the Body of Your Vehicle.

In older cars, as well as most modern trucks and a few SUVs, the body sat on top of a frame, which was the primary structural component of the vehicle. Today, all cars, most SUVs, and even some trucks use a unibody design, which means the body itself is the structure of the vehicle.

Body damage could be merely cosmetic, or it could compromise the safety and structural integrity of the vehicle. Here’s how to identify different types of damage and determine how severe it is for your particular car.

When to Perform a Vehicle Body Inspection

You should always inspect the body of a vehicle you’re thinking about buying. A fresh coat of paint may look pretty on the outside, but it could also be hiding evidence of past damage or even crashes. Depending on the severity, it may still be worth buying the vehicle, but knowing how to read its history in the body can help you negotiate a lower price, or tell you if the seller is trying to mislead you. If the damage is bad enough, you may want to walk away entirely.

On a car you already own, you should do a vehicle body inspection once a year, or if you see evidence of new damage such as flaking paint or rust.

What Are Common Symptoms Indicating You Need to Inspect the Body?

Here are some signs you should check your car for body damage:

Can I Perform a Vehicle Body Inspection Myself?

Yes! It’s not rocket science. Basically, if there are any imperfections in the paint or the body, that’s something to investigate further. We’ll give you some specific things to look for that could indicate bigger problems underneath.

Take a slow walk around the outside of the car. Look for any imperfections in the body, particularly in these areas. 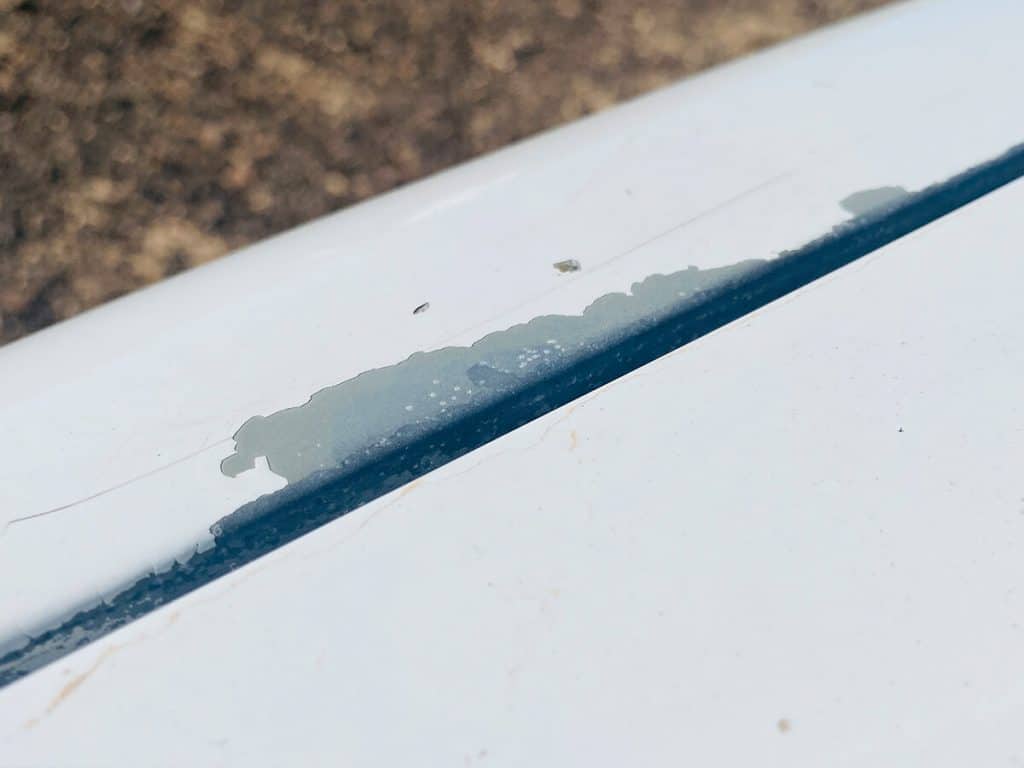 First, look for obvious items. A different color body panel isn’t necessarily a problem, particularly if it repairs previously existing damage. Something happened to cause that replacement, though, so it’s a sign to look for signs of further damage elsewhere. You may also want to consider the cost of getting that panel painted to match the rest of the car.

Check for any fading, discoloration, flaking, or the paint fading away completely. A little bit of fading in the sun is normal, but some colors on certain cars last better than others. As long as the paint is still intact this is merely a cosmetic issue. If you see the grey primer anywhere, or bare metal and rust, this is a much bigger problem that will need to be repaired.

Look for any signs of paint that don’t quite match with the rest of the body. This includes not only the color but also the texture and glossiness of the paint. A subtle difference may indicate a professional respray. This tells you that something in the car’s history required some new paint. This is a clue that the car might have had some rust repair or been in an accident. If the job was done well this isn’t necessarily a problem, but it’s a clue to take a closer look at the rest of the body.

Another sign to look for is overspray, where the body color got sprayed onto parts of the car that aren’t that color from the factory. This can happen on trim pieces, inside the wheel wells, or underneath the car. A good quality paint shop won’t let this happen, so this is a sign that a less-than-good shop repainted the car.

Finally, look for scratches in the paint. If these have been touched up properly, they may not be a problem. The existence of scratches, though, may indicate that the previous owner didn’t take good care of the car, or that it lived a hard life in a city where occasional minor damage is hard to avoid. Untreated scratches that go through the paint to bare metal can also allow rust to form, which we’ll get into later. 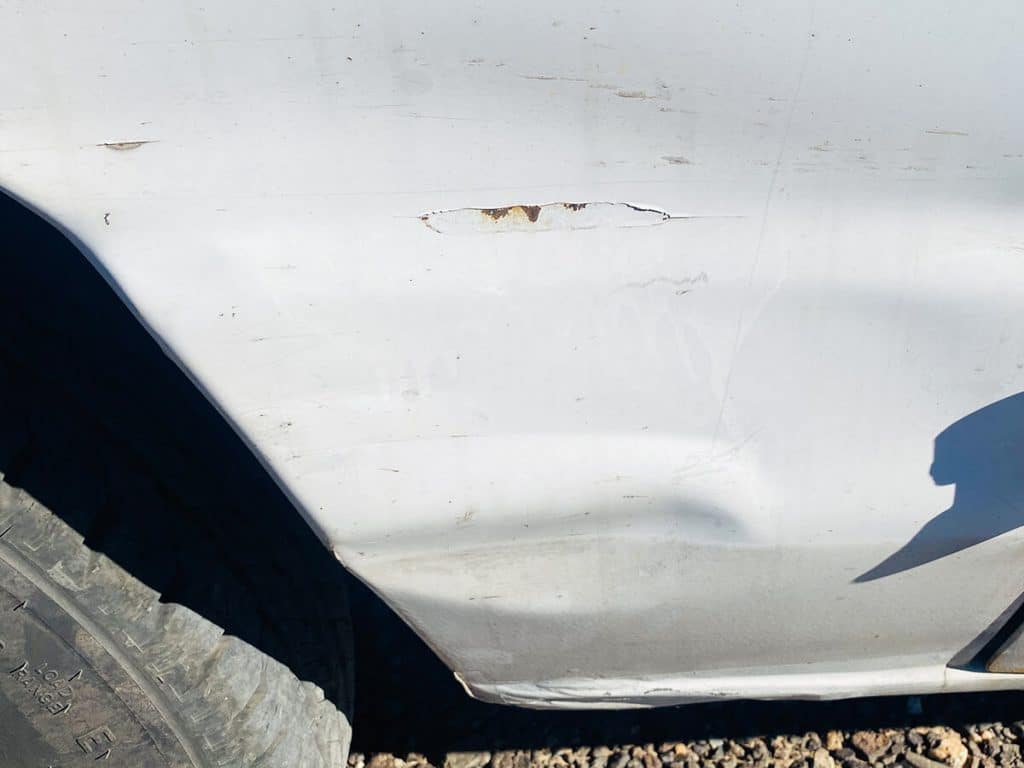 The body should be smooth, bending and creasing only where the manufacturer intended it to. Any ripples and dings in the body got there by something hitting it after it left the factory. Every mark has a story, and you should learn what that story is.

Vertical body panels, such as doors and fenders, most often see damage from things hitting them from the side. They could be as minor as the door of another car or a runaway shopping car, or as significant as a major crash.

Horizontal body panels, such as the roof, hood, and trunk lid, get damaged in two ways. One way is that they crumple when getting hit from the front or back. The other way is from items falling on top of them. A large number of golf ball-like dimples, for example, is a sign of hail damage, each small dent happening when a piece of hail fell on the car. Larger dents indicate heavier objects falling on it. 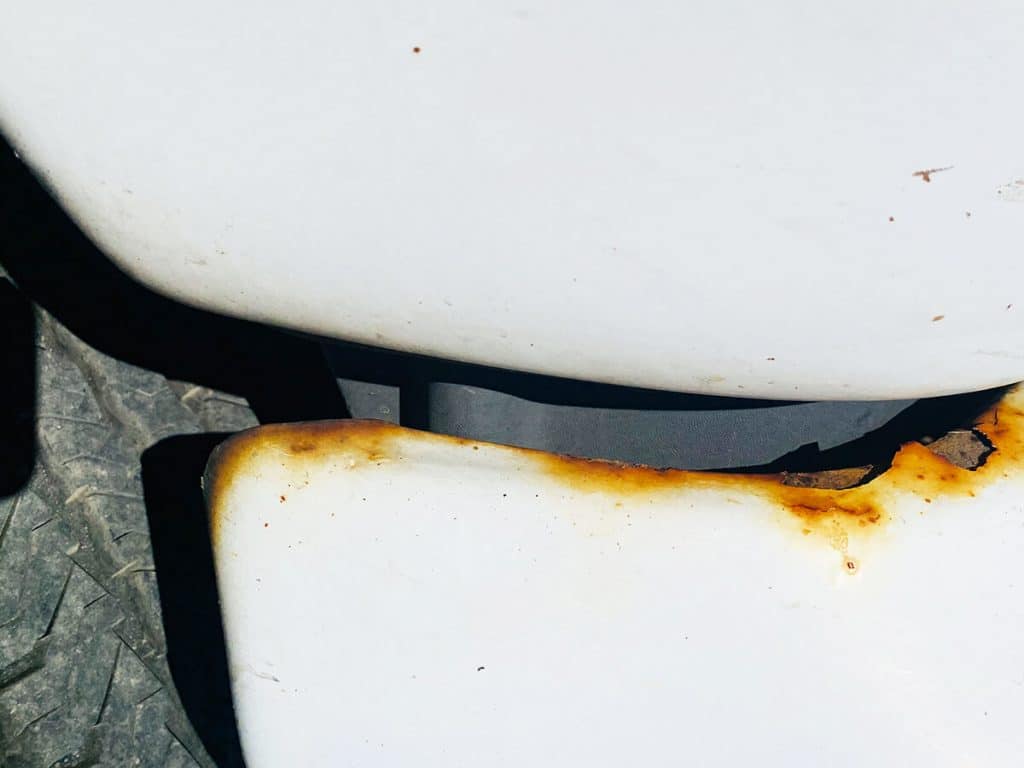 Rust is the bane of any car from northern climates. Like cancer, once it takes hold it is difficult to remove entirely, and the proper way to do so is to cut away all of the affected areas. Otherwise, it will continue to eat away at the body, causing bigger and bigger holes, and eventually structural failure. 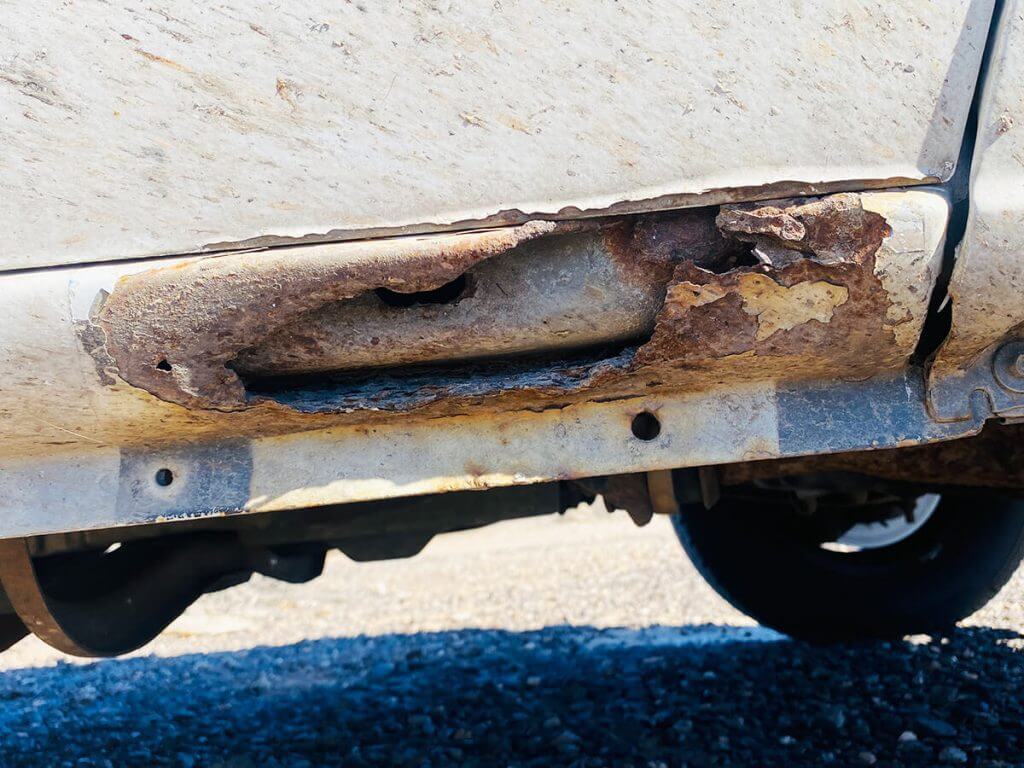 The most obvious signs of rust are areas of missing metal. It’s common to find rust along the edges of wheel wells, as well as along the rocker panels. Road salt tends to collect on these areas and encourages rust to form. 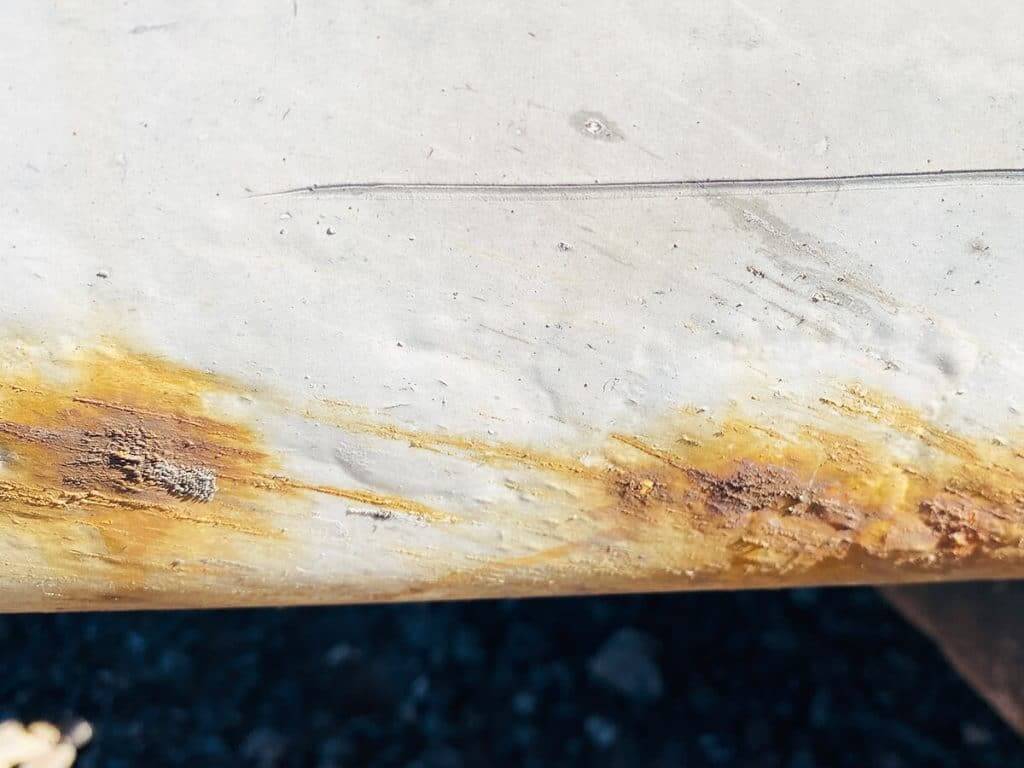 Another sign of rust is paint bubbling away from the body. Sometimes water collects inside body panels, which then rust from the inside out. Bubbling paint is a sign that this is happening. Sometimes the rust will come through the paint and discolor it as well. 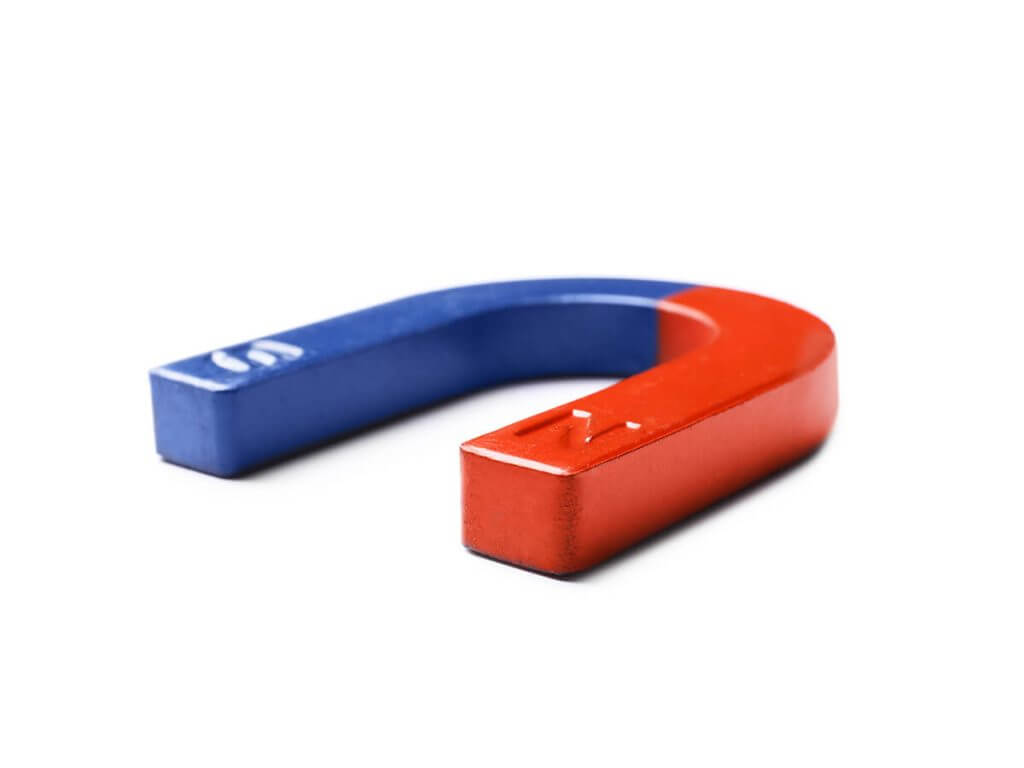 Most car bodies are made out of metal. Magnets stick to metal, and you can use one to make sure the outer surface of the body is still metal, rather than fiberglass or body filler after a repair. Particularly in areas you suspect have been damaged, place a small magnet against the body to see if it sticks. If it doesn’t, that’s another clue that the area was damaged and repaired in the past.

You’ll have to do your research and make sure that any body panels a magnet doesn’t stick to aren’t supposed to be other materials. Many people know that Corvette bodies are fiberglass, and older Saturns have plastic body panels. But aluminum, which is not magnetic, is becoming more common because it’s lighter than steel. Recent Ford F-150s have aluminum beds for this reason. Even the hood of my Ford E250 van is some kind of composite material, not metal, as I learned when I tried to stick a magnetic-mount antenna to it! 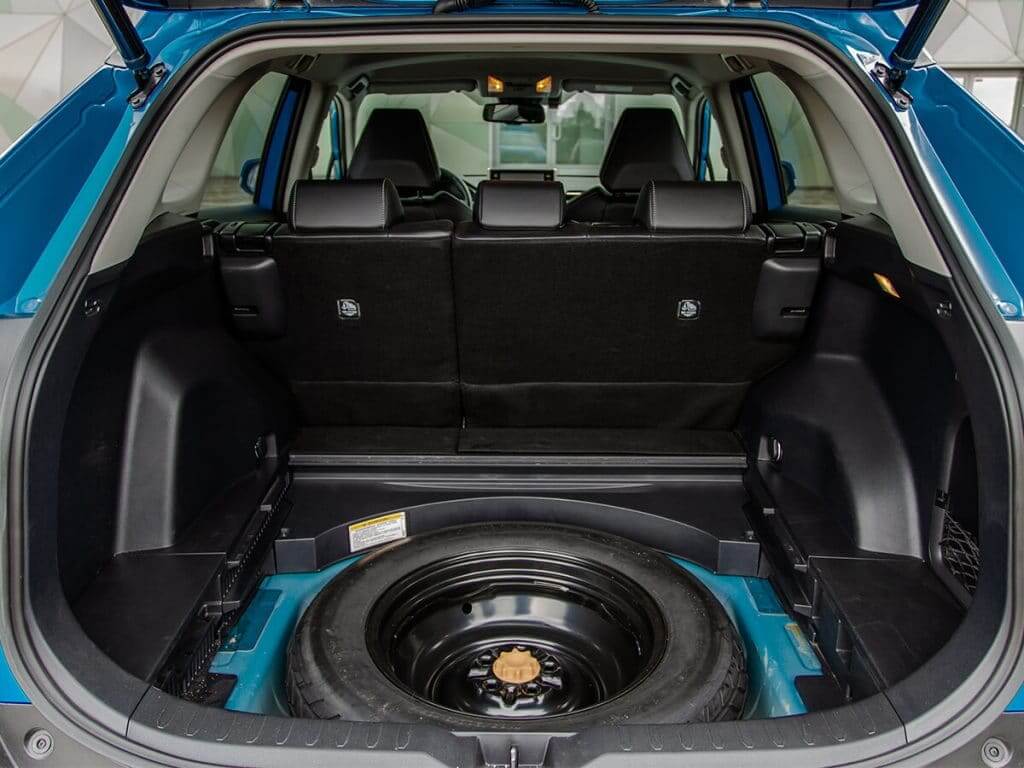 These telltale signs aren’t limited to the outside of the car. Open the doors, the hood, the trunk or hatch, and check areas that aren’t normally visible for all of these as well. If a door matches the rest of the car on the outside but there are areas of a different color not visible when it’s closed, that door was probably replaced at some point. Look for signs of rust as well.

In the trunk or rear cargo area, pull up the carpet and look at the bare metal underneath. Check for any wrinkles in the metal. Some are there by design, but any wrinkles with a random pattern to them indicate crash damage from a rear impact. Since this area isn’t visible, body shops may not put in the effort to make the repair look as perfect as outside areas. That doesn’t necessarily mean it was repaired badly, but again, it’s a clue about the car’s history.

Put Together the Clues

Any one of these problems, or even a combination of them, may not be cause for alarm. If you see signs of minor imperfections in an area, and the owner confirms that the car suffered a minor parking lot collision in the past, that tells you there likely isn’t any major structural damage and that the owner is honest. If you see obvious signs of widespread rust and the owner tells you the car lived in Arizona its entire life, they might not be telling you the truth.

In a vehicle body inspection, your job is to be a good detective. Look for clues, find them, and put them together in a way that tells the story of how the car came to be in the condition it’s in after leaving the factory in perfect shape. This may also help you find issues in a car you already own that hasn’t yet revealed secrets hidden beneath the surface.